Was asked to look at a VW Polo with drls and asked to turn them off! Found this info but decided not to try it as they are on for a reason. To turn them off, switch them off as follows on a Polo. Insert key in ignition, but don't turn it. Turn the headlight switch to the "0" position. Move the indicator stalk to the left position and pull towards you, as though you were flashing a warning at another car. Turn the ignition on, but not the engine. Wait at least four seconds and you should hear three bleeps to indicate that the DRLs have been deactivated."
Posted by Nick Gutten I.Eng MIET at 01:05 No comments:

I was asked to have a look at an Audi A4 with a noisy driver's window recently, the window emitted a metallic grinding sound when opened and closed.  From other reports on the Internet it appeared that a replacement drive mechanism was the cure. This involved a complete strip down of the drivers door. 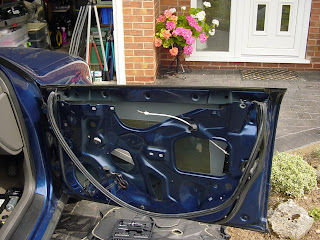 The cable driven mechanism was replaced with a new Audi part, see below, and the door reassembled. 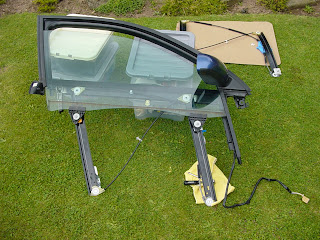 Total time for the job was two hours and after reinitialising the one shot we now have a smooth, quiet driver's window.  Investigation of the old winding mechanism revealed the source of the noise; the cable inside the spool had a kink which was fouling the rest of the cable as it wound up and down. It was also wearing the nylon outer spool. 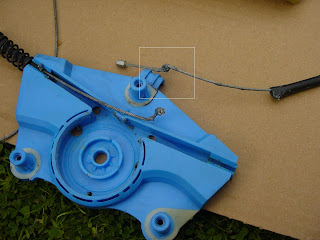 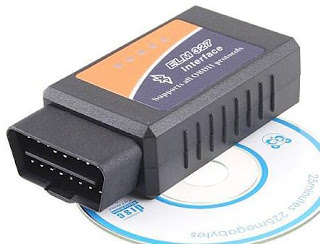 No DTCs were available to read but I'll update when I use it for real!
Posted by Nick Gutten I.Eng MIET at 01:31 No comments:

I was asked to investigate a problem on a 2003 VW Polo with a EPC warning light permanently on. On investigation the brake lights did not operate either. There was 12V from the brake light switch with no load but not when the lamps were connected.  The switch was replaced and after a couple of brake pedal actuations and ignition cycles the lamp went out without need for the diagnostic kit.

The old switch was examined and the contacts were pitted and well worn! 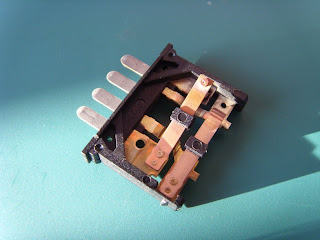 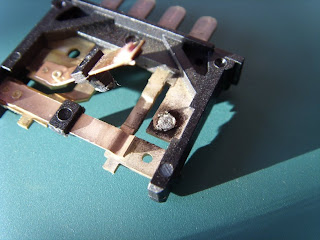 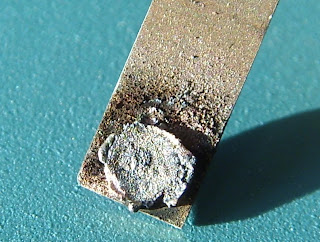 I was asked to look at a Fiat the other day and I found this web site which contains lots of useful data for connecting to Fiat CMs.
http://www.fiatecuscan.net/

Email ThisBlogThis!Share to TwitterShare to FacebookShare to Pinterest
Labels: fiat

Found this useful site with details of Remote key programming for VW family cars. This will only program the key for remote operation of locks and alarm, it does not align the key with the immobiliser!
There is also info for resetting the service lamp on various models. This will not reset the "long life" service warning.
A useful site anyway http://vwdiesel.com/
Posted by Nick Gutten I.Eng MIET at 03:13 No comments: